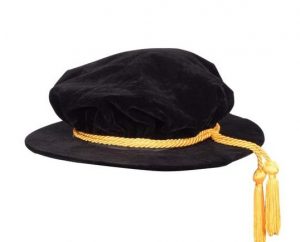 Normally I would borrow my graduation robes from the University’s chosen provider of gowns to the multitudes (for a small fee, of course), they really are the modern-day Dick Turpin of graduation services.  The students en masse may be thrown to their tender, if extortionate mercies, at least this university pays for the academics’ graduation robes, and it really is quite a good service.  You turn up late, looking like a shambles, someone throws a gown, hood and a white bow tie at you and everyone hopes for the best!  A more fun way of doing is to play academic roulette.  Don’t reserve any graduation robes at all, turn up with less than two minutes to go, and see what they chuck at you!

A DPhil from Cambridge could be yours, or you might end up with a random qualification the Naval and Maritime University of Uzbekistan†; it really is dressing up day at the office. This reminds me of a story from a few years ago.  After this particular ceremony was all over and people were returning their borrowed graduation robes, one of my colleagues in what could best be described as a Fagan-esque manner was collecting up the gowns and hoods that had been abandoned by the academic staff.  Now, I don’t want to be doing the chap a disservice, but in the short time I had been working with him he had never appeared the least bit helpful at all.  So I edged quietly over to one of the departmental stalwarts to find out what was going on with his burgeoning collection of graduation robes.  She informed me that Dr X had a reputation for selling all the hoods and gowns he could find after graduation on eBay.  The academic registrar knew of his private venture but was never able to catch him!  What made them suspicious I inquired, I was told he never volunteers to go to anything and he seems to attend almost all the graduations every year.  That evening I checked eBay and discovered a UK or USA PhD gown and hood would sell in the region of $150, Dr X is onto a nice earner! 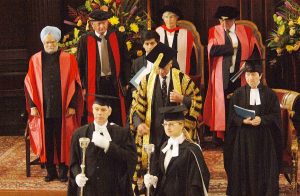 Anyway, this year’s graduation is upon us, and staff have not had to get their graduation robes back out of storage and from the dry cleaners.  Covid-19 is still prevalent and another set of remote graduations are upon us.  When staff, I mean around 50% of them as approximately half can never be bothered turning up to clap endlessly for the students passing across the stage like some sort of cattle market auction in graduation robes. Personally, I look at some of them as a form of relief – finally done with so and so, how on earth did that one ever manage to finish their degree, oh…and there’s one who really deserves glory today!  At least this means there will not be the repeat of what happened in the UK a couple of years ago when a group of colleagues were outside the campus entrance, dressed in graduation robes, placards in hand, on a union endorsed strike over pay and pensions changes!

So, please remember to enjoy the day with your friends and family, in a socially distance manner of course!  Graduation day is not only about you, it is your opportunity to thank the people who have helped and supported you.  Now, if you want to re-enact it at home you could always buy a set of graduation robes from Dr X’s eBay site!

†Uzbekistan along with Liechtenstein are the world’s only two double landlocked countries, so it would highly unusual if it were to have a ‘Naval and Maritime University’… So that was not a slight on the Uzbek Higher Education system, but rather people who robe in made-up academic gowns!

The ‘Secret Professor’s great heroine: Professor Elizabeth Anscombe (above). The greatest English philosopher of her generation and Ludwig Wittgenstein’s literary executrix. She was outspoken, often rude, smoked cigars and sported a monocle.